Gun control. If you’re against it, you are clearly a liberty loving, true, red-blooded, ammo-hoarding patriot. If you are for it — in any way — you clearly hate your fellow Americans and want them to die trampled under the boot heel of an oppressive, tyrannical government. But are there possibly other, more nuanced views of guns that are held in this country? As unlikely as that is, we wanted to find out, so we asked five random people we found on the street how they felt about gun control. But we wanted to make sure they were honest, so we put a gun to their heads to make sure they felt the right amount of pressure to be forthright about guns.

Um, can you get that thing away from me? No. Okay. Then I guess, I like guns? Is that the answer you want to hear? I’ll say whatever it is you want me to say, just please stop pointing your gun at me. 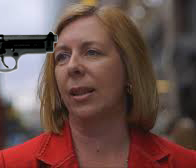 I love guns! Guns are great! I use them to make potato salad and often times I take my gun out for strolls along the beach. In fact, if I could say one thing about guns, it’d be that they just about make me the happiest person alive! Is he gone? Is the guy with the gun gone? Thank God, now I can breathe again. I hope I said what he wanted me to say.

I’m a free market libertarian, gun loving patriot. You’re not scaring me with that gun, because I have my own gun right here. Oh wait, you’ve already gotten the drop on me, like what happens in a lot of shooting situations, and I don’t have time to get my gun out, steady my nerves, concentrate, aim and fire at you before you blow my fucking head off. Oh well, at least I’d die by one of the greatest things in America ever: a gun.

I’ll answer your question, but do you have to put the gun to my head like that? You do? Why? No, I’m not being a libtard, I’m just asking. Because I’m a Republican and I am generally okay with guns, but you are taking this too far — No, no I don’t want any trouble. Okay. Okay. Yes. Guns are good. I like guns all the time everywhere. If I am in a place with no guns, I feel unsafe until there is a gun there. Okay, now can I go? Why? Oh jeeez. Okay, fine. Also, Obama better not take my guns because “shall not be infringed.” There, are we done here? Sheesh.

Uh, uh. Umm. It’s really kind of hard for me to think actually, with that gun pointed at my head. I can’t seem to get away from your gun long enough to formulate an opinion based on anything but gut reaction in the moment. I’d like to take some time to sit down and work out the pros and cons of a society where guns are so easily obtained, and weigh that against everyone’s right to protect themselves, but with the gun in my face this whole time, I feel rushed so I’m just going to say, yeah, okay, guns are fine. Can I go now, this is very scary.

And so there you have it, no matter what, Americans love guns and don’t want anyone to do anything about gun violence…until someone they love gets shot. But that’s a survey for another time!

Trump: “I’d Hate to See Something Bad Happen to Cleveland if...

6 Presidential and Classy Ways Ted Cruz and Donald Trump Can...