NEW YORK, NEW YORK — Donald Trump’s feud with the hosts of MSNBC’s “Morning Joe” has reached another level this week.
https://twitter.com/realDonaldTrump/status/767685048703279104
Just a day after insinuating in a tweet that Joe Scarborough and Mika Brzezinski might have a more than professional relationship, Trump blasted out another tweet in which he said that he had witnessed the colleagues up in a tree in New York’s Central Park. Brzezinski and Scarborough were kissing, according to Trump. 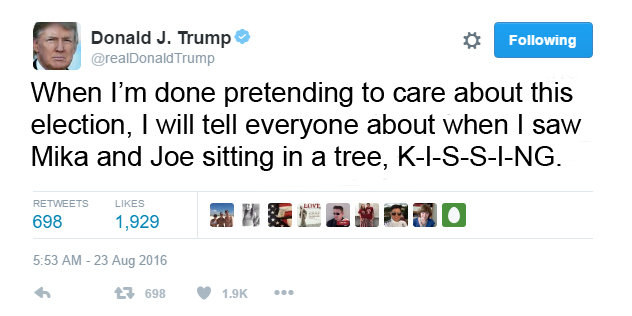 Trump said in subsequent tweets that he had “heard a rumor” that first Scarborough and Brzezinski “fell in love,” then they planned to do “a marriage,” and at some point they plan to “have a baby in the baby carriage.” The alleged-billionaire and Republican presidential nominee said that as president he will “make sure to follow all the hot gossip like, you know, presidents always do.” Trump did admit in a follow-up tweet that he’d seen the two talk show hosts at a “considerable distance” so it might not have been them in the tree. 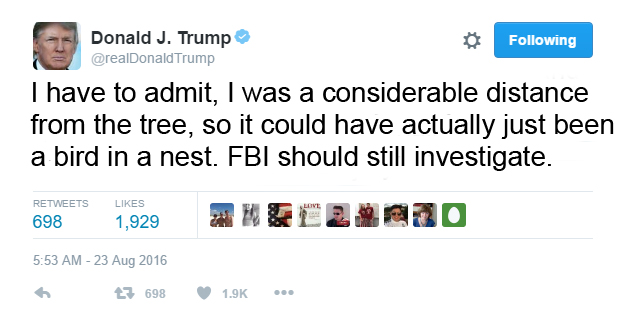 At a press conference outside his New York apartment building, Trump told reporters that “it’s the job of every president to know everything that is going on within his kingdom.” He said that as president, he will have special operatives spread throughout the country, listening in on people’s conversations, and then reporting back to him.
“I’ll insist they get right on the telephone and tell me everything they hear,” Trump said, “and we’ve been testing this pilot program out. Why, just the other day one of my field agents reported hearing that a large shipment of cocaine was inbound to the port of Miami. Huge. Huge news.”
The agent in question was later tracked down and asked for some further details.
“Oh, no, I told Donald that I was was at Denny’s,” the agent said, “and a man with a cane ordered a coke and a Moons Over My-Hamny. I guess Trump couldn’t hear me quite perfectly over the telephone. He didn’t seem to care though; it was like a game to him.”
Speaker of the House Paul Ryan (R-WI) told reporters that he found Trump’s comments about the MSNBC hosts to be “tacky, in bad taste, and not at all presidential.” Trump’s proposal to essentially spy on every American so he could get half-correct tidbits of information is “almost certainly illegal,” Ryan said. However, when pressed by reporters, Speaker Ryan said his endorsement of Trump still stands.


“Is Donald the idea candidate,” Ryan asked rhetorically, “of course he isn’t. Is what he is doing disgusting, tacky, in bad taste and not at all presidential? Of course it is. But will I still vote for him? Yes, yes I will. Why? Because Democrat, that’s why.”
This is a developing story.

Does Tucker Carlson Remove the Nazi Dicks in Trump’s Mouth Before Puting Trump’s In His Mouth?

3 Things Donald Trump Did During the Eclipse