FRISBEE, WEST VIRGINIA — Reverend Jack Malloy is a Presbyterian minister and a self-espoused “super fan” of President Donald Trump. Malloy was one of the ministers in the Oval Office that were seen “laying hands” on the president as they prayed. An image of the practice, shared by one of the other preachers in the room, has since gone viral. 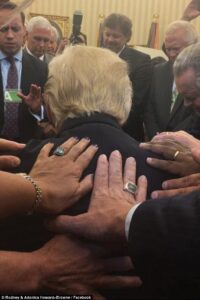 Malloy told a right-wing radio host in his home state of West Virginia this week that it was one of the “highest honors” he’s ever had. Rev. Malloy said that the experience of putting his hand on Trump and “inviting the divine holy spirit of God” to pass through him and into the president was “truly magnificent.” Malloy said he could feel something at the time, a hot and radiating energy in his hands, and he just assumed it was the will of God working through him.

“After all,” Malloy told the radio host, “Who among us is more like Christ than Trump? Jesus healed the sick, and Trump wants to take healthcare away from millions of Americans. Same difference, right? So I just kinda thought the heat I was feeling in my hands was the Holy Spirit or some shit.”

RELATED: God Tells Michele Bachmann If The Anti-Christ Were Real He’d Be The ‘Narcissist You Voted For’

When the reverend awoke the next day, however, he had a feeling that something wasn’t quite right. His hands hurt like they’ve never hurt before. When he roused himself out of bed and went into the bathroom, he saw what doctors would confirm for him as third degree burns on his hands. He wasn’t sure what exactly had happened, but Malloy said some “pieces of the puzzle started to click into place” as he remembered everything that transpired with Trump.

“It was the strangest thing,” Malloy said, “to wake up with those burns on my hands. But as I started to put it all together, it kinda made sense.”

Malloy said that as he put his hands on Trump and started praying, not only did he feel the heat radiating in his hands, he started hearing a deep, growling voice. It was laughing, Malloy said, rather intensely. He wasn’t sure, but he thought he could hear old school Metallica in the background. As he prayed, Reverend Malloy said he also happened to open his eyes for just a second, and where Steve Bannon had previously been standing were four men on horses, scythes in their hands.


“That was funky as all get out, no doubt about it,” Malloy said, “But I thought maybe I had accidentally taken LSD or something. Besides, the Lord really does move in mysterious ways doesn’t he? I think he does. After all, he gave us — the Religious Right — a candidate who won last year’s election, even though that candidate likes to grab women’s genitalia, has been married three times, and is generally a mean-spirited, rich douchebag the likes of which Jesus would have pummeled verbally and perhaps even physically back in his day.”

The voice that Reverend Malloy heard kept laughing harder the longer he kept his hands on Trump. It was the first time he’d heard anything besides his own breathing or his own internal monologue while praying, though, so Malloy didn’t think much of it until the next day. In hindsight, he says, perhaps he should have taken his hands off Trump once he heard the voice and saw the four horsemen, but he says that he got one more clue that something wasn’t quite right, and that should have been the final straw for him, but it wasn’t.

“We all heard this ominous, booming thunder crack from above,” Malloy said, “and clear as day we heard a voice from on high. It said unto us, ‘Oh you have GOT to be fucking kidding me! This fuckin’ guy? Dudes! C’monnnnnnnnnnnnnnnnnnn.'”

Doctors say that Malloy’s hands should fully recover, but he says his days of laying hands on politicians are over. Luckily for Malloy, the members of his congregation took pity on him, and showed up at his 3,200 square foot estate, bearing gifts and care packages.

“The fact that they went above and beyond and gave me more tax-free shit? That’s just heart warming y’all,” Malloy said.

Does Tucker Carlson Remove the Nazi Dicks in Trump’s Mouth Before Puting Trump’s In His Mouth?

3 Things Donald Trump Did During the Eclipse