SIMPLE PLAINS, NEW JERSEY  — From the comfort of his upstairs bedroom in his parent’s modest, middle-class single family detached home, self-proclaimed free market libertarian and fiscal conservative Marcus Palumbozo helps to run at least four libertarian and right-leaning Facebook pages and writes regularly for right-wing think tanks like The Hayek Institute, the Foundation for Economic Education, and Liberty.me. He has managed to gain a bit of a cult-like following among young, libertarian, white males who are looking for an outlet that speaks to their beliefs that the free market must be rule-free in order for prosperity to flourish, despite his critics regularly pointing out that Palumbozo’s work often relies heavily and exclusively on someone else’s data analysis done at a think tank or an organization that would be heavily biased toward a conclusion Palumbozo himself would like to come up with. Palumbozo shrugs those critiques of his work off as the “whining of people who aren’t as smart” as he is.

Last week, Palumbozo along with some friends that help him run “biased America,” one of his many Facebook pages, created a series of memes aimed at taking down 2016 Democratic candidate Bernie Sanders’ views of the economy. In one such meme, he drew a comparison of annual salaries of the entire planet’s workforce and where that salary would put someone making that amount in the global economy. In other words, even though someone making $15,700 annually would be near the bottom of American wage earners, when put in a global context, that person would make enough to be in the top 7% of all working humans alive today. 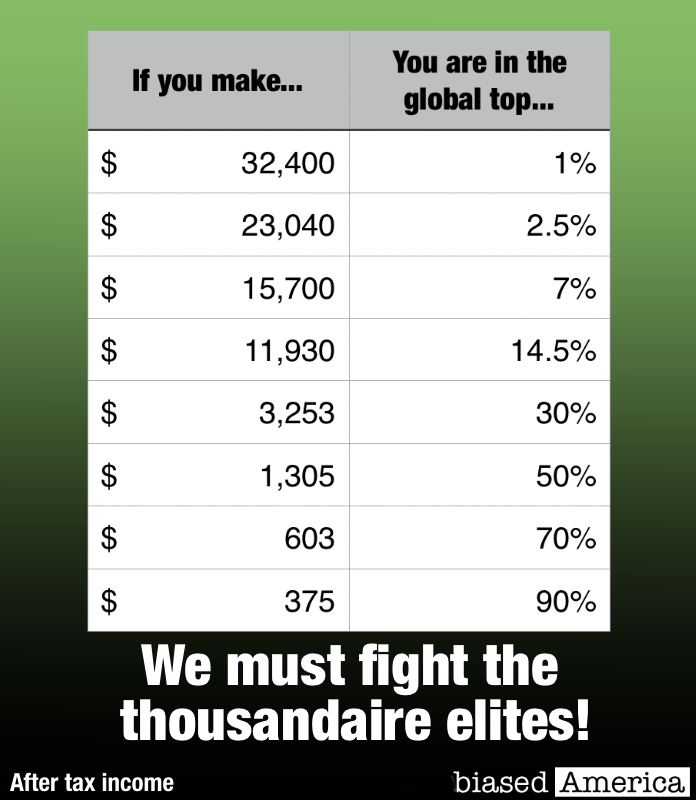 “It doesn’t matter that Sanders was talking about American working conditions and how they relate to American citizens,” Palumbozo told our reporter, “the only thing that matters is profit and economic growth, period. So if you have to change the focus of the conversation to something entirely else — something almost irrelevant to the discussion at hand — in order to help reinforce in people the belief that we should let our poorest people suffer in the same exact ways that other tremendously poor people suffer in undeveloped countries, then so be it.”

Palumbozo told our interviewer that “Americans have gotten so used to the welfare state that they can’t possibly fathom a poor person not having things like air conditioning, or a way to keep their food from spoiling,” and that this mentality allows them to “care far too greatly about the quality of life of their fellow humans” when they should be “focused solely on creating more wealth for the wealthy.”


“People talk crap about Trickle Down Economics,” Mr. Palumbozo said during one moment in the conversation, “but for starters, that’s not even a real thing because it’s a nickname. No one in economics calls it Trickle Down, unless they’re like on TV and shit. But anyway, they talk crap about Supply Side economics, but look at how wonderful it was for the American middle class! We’re all so much better off now that the middle class is shrinking because clearly everyone is too rich now to be considered middle class, and not because new wealth is so quickly sucked up in the upper echelons of the economy that it doesn’t make its way down to the consumers who need to consume in order to make your consumption based economy work. Duh.”

Palumbozo said he created this meme because he wanted “to knock some sense into Americans” because in his view they all “don’t look at the big picture.” That big picture, Palumbozo claims, is that “poor people in America would have much worse lives if they lived somewhere else” and that “they should really consider themselves lucky to be poor in America.”

“I just think people should stop complaining about the middle class shrinking in America,” Palumbozo said as the interview was ending, “because yeah, maybe in the country that they spend the overwhelming majority of their lifetimes in has a shrinking middle class, but all they’d have to do is move their loved ones to a third world country and they’d see what real poverty looks like. And if they’re not willing to do that, maybe they should do what I did and move in with their folks. I mean, why can’t everyone else just live at home with their parents too? It works really well for me.”

5 Reasons Bernie and Hillary Fans Should Be BFFs For Reals