Fake ‘March for Science’ pages are stealing money from the actual March.

Unless you’ve been living under a rock, you undoubtedly are aware that there will be a March for Science in Washington, DC on April 22nd, 2017, on Earth Day. This is an exerpt from their official website:

The March for Science is a celebration of our passion for science and a call to support and safeguard the scientific community. Recent policy changes have caused heightened worry among scientists, and the incredible and immediate outpouring of support has made clear that these concerns are also shared by hundreds of thousands of people around the world. The mischaracterization of science as a partisan issue, which has given policymakers permission to reject overwhelming evidence, is a critical and urgent matter. It is time for people who support scientific research and evidence-based policies to take a public stand and be counted.

The March’s popularity has exploded over the past few weeks, as the creators scurry to get specifics about the March organized. And since almost nothing in life is free, they’ve created an official store on their website, as well as a site for you to donate to the cause.

I’ve come across many ads selling shirts for the March in my Facebook news feed. I probably pay more attention to ads on Facebook than the average person since I sell merch myself, have no background in marketing/sales, and want to see how others are promoting themselves. The ads included Bill Nye, Neil deGrasse Tyson, and Jamie Hyneman (pictured in the embedded post below).


At first, I didn’t think too much of them, as it made sense for prominent science communicators to support the March. However, something always looked off about them. How did they get the shirts so quickly? How did the creators of the March collaborate with these celebrities in such a short amount of time? And more importantly, why didn’t they set me up with a free shirt to model? (Alright, I guess I understand that last one.)

After a closer look at the posts, it doesn’t seem like this is something that actually happened. That led me to making the following post on my personal page, which I then shared to aSE:

And here is the un-edited image of Mythbusters star Jamie Hyneman: 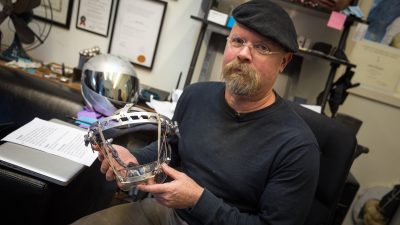 There were a couple other similar posts I came across before I realized they were fake, but here is another example I found today: 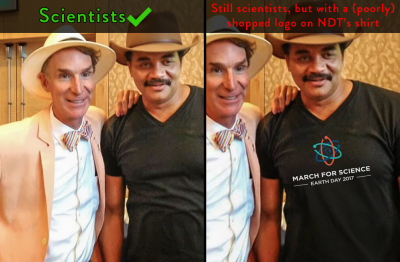 There are many imposter pages out there pretending to represent the March, such as this one, this one, this one, this one, and this one. These pages are very obviously attempting to portray themselves as the actual March for Science, NOT a local satellite March, and all either have posts visible on their pages directing users to a goo.gl link, are running ads, or both.

To help differentiate between the legitimate March page and the imposter pages, I created this quick primer below for you. You can which is the legitimate page by their “verified” blue checkmark, the disparity of page likes, and which one is ran by one or a collective group of douchecanoes:

So what’s the big deal?

There are a few problems here. The first being they are stealing the notoriety of not only the actual March, but also the science celebrities they are pretending endorse their hijacked version of the shirt. This distracts attention from the legitimate March and satellite marches going on around the world. Additionally, it is pretending that these celebrities are endorsing the content of the fake page, which they may or may not openly support.

Not only that, but the content of the fake march pages is not managed by the actual organizers. It’s being ran by people who likely don’t care about the March itself or spreading rationality and critical thinking. As a result, these fake pages run the risk of spreading bad information and pseudoscience, such as this post on one of the pages: 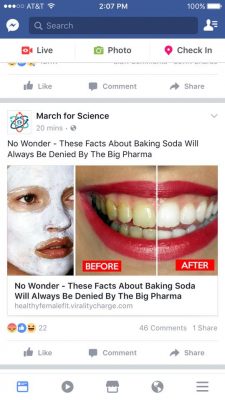 What’s more is it’s literally stealing money from the group, which impairs their ability to organize and promote the March itself.

What can you do?

Trump’s Finger is On the Nuclear Button. And There is No Failsafe.

Alex Jones and Pizzagate: Life is Hard When You Have to Apologize

Texas AG: Christian Prayers In School Are Good, Other Religions Are...

How to Avoid Liberal Echo Chambers But Stay Sane