Donald Trump took to Twitter Saturday morning to chastise the cast of “Hamilton” for exercising their First Amendment rights: 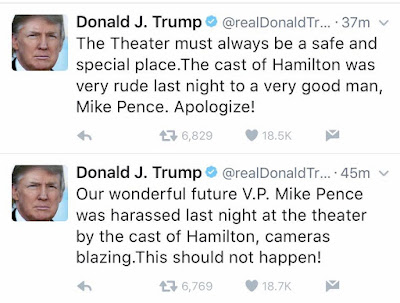 The “rudeness” Trump is referring to is a message Brandon Dixon delivered to Mike Pence after a performance. Take a moment and watch the video.

Was that rude? Was it some sort of attack on Pence? Absolutely not. Dixon starts by saying “There’s nothing to boo here,” and points out “we’re all here sharing a story of love.” He thanks Pence for coming to the performance. Dixon speaks about the diversity of the “Hamilton” cast, and says he hopes Pence is inspired to protect all Americans’ inalienable rights after experiencing the play.

The theater is most definitely not supposed to be a “safe” place. Art is often not safe. Art can be shocking and educational, it can be moving and powerful, it can speak to moments in history long forgotten or glossed over.

Donald Trump‘s only response to the 400+ hate crimes being perpetrated by his supporters was to tell them to stop during a 60 Minutes interview. But when his VP-elect goes to the theater, and is gently reminded to protect every American, Trump takes to Twitter to demand an apology.

Once again, Donald Trump proves he is not presidential in any way, shape, or form. We, the citizens of this nation, have the right to protest in whatever peaceful way we see fit. Including a diverse cast of a hit Broadway show coming together to deliver a message of inclusivity aimed at the least inclusive administration in modern history.

Surprising No One, Trump Has an Inhumane and Unhelpful Response to...

You're Allowed To Care About The DNC's Corruption AND Not Want...