WASHINGTON, D.C. — With steadily mounting pressure from the press and bipartisan intrigue into connections between his co-presidential administration growing by the minute, Donald Trump has begun to lash out on Twitter again. Already under fire for his completely fallacious accusations of wiretapping against Barack Obama, last night, the co-president sent two tweets. Both tweets raised questions about a right-wing conspiracy involving the sale of uranium to the Russian government while Hillary Clinton was still Secretary of State.

While it is true that a deal was struck while Clinton was Secretary of State, there were eight other governmental agencies overseeing it, and it was not done in secret. Most security experts said it was not a threat to national security, and moreover, neither Clinton nor former-President Obama did anything to hide the deal, as it was widely reported on at the time. For many, the “Clinton Uranium Deal” has become not much more than a conspiracy theory. 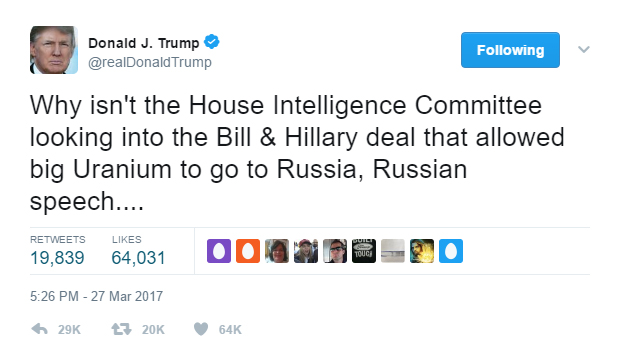 Many people on the Hill are saying that Trump’s tweets indicate he is getting more and more nervous about the questions swirling around his election, and just how much help Russian President Vladimir Putin gave him. His latest tweets seem to follow a recent trend of his — wild accusations of malfeasance perpetrated by his political rivals without any provided evidence. The calls for an independent investigator have grown louder after House Intelligence Chairman Devin Nunes’ curious behavior over the weekend, bringing intelligence to the White House — that may have come from within the White House — before briefing the rest of his committee.

RELATED: Attorney General Sessions Not Sure He Enjoys The Taste of Trump’s Anus Anymore

This morning, the co-president sent another series of tweets, this time demanding that Congress probe more things he finds “troubling and disturbing.”

“Am I the only one who finds it bigly troubling and disturbing that Congress is so concerned with this so-called Russia thing,” Trump tweeted, “but not interested in the connection between Crooked Hillary, Obama, JFK, Nessie, and Miley Cyrus? STRANGE! SAD! WORDS!”

“We’re still putting the pieces together, but believe me, trust me, put all your faith in me and only me,” Trump tweeted, “I will be vindicated. Even if I have to make up stuff to vindicate me. That’s how dedicated to being right I am. This goes all the way to the top and I demand that Congress investigate this, my latest brain fart, right now. So sayeth me, President Emperor Trump.”

When asked at a press briefing later in the day about the co-president’s paranoia-fueled tweets, White House Press Secretary Sean Spicer stammered, sputtered, and ultimately his head exploded again, leaving engineers with a mess to clean up and a new semi-sentient cyborg slug creature to reprogram and pour into a suit mold. Congressman Nunes was seen rushing into the White House with a big envelope in his hands marked, “Plan Q.” Nunes offered to answer questions as soon as he got Trump’s dick out of his mouth.

This is a developing story.