It was all too predictable. As soon as Robert De Niro and his Tribeca Film Festival made the announcement that they would be pulling Andrew Wakefield’s “documentary,” Vaxxed, from their line-up, it was only a matter of time before the anti-vaxers would get themselves riled up into a frenzy and claim censorship. Clearly the cancellation of the movie was a result of Bernie Sanders’ collusion with Barack Obama’s Socialist Reptilian Mafia, who owns Big Pharma.

The battle cries came swiftly and laden with caps lock: 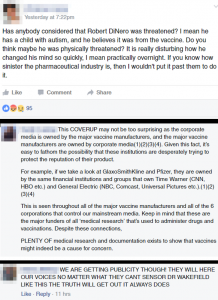 There’s even a Change.org petition to try to bring it back.

Above all these, perhaps my favorite response came from Mike Adams – the “Health Ranger” himself – from Natural News. Adams went from zero to Nazi in about 0.3824 seconds.

The anti-vaccine camp believes that they are being censored, because now their documentary won’t be shown at the Festival.

Not all types of free speech are created equally, and censorship can be a fickle term . While you are free to say what an average person would consider to be pretty extreme things, you are not free from the societal ramifications resulting from that. As a guest in the movie theater, you are not in a public place- you’re a guest of the movie theater’s private establishment. Yes, theaters are generally open to the public, but the theater can choose to remove you from their private establishment if they feel you are disrupting their other guests or pose a safety hazard.

For example: Let’s pretend that my “friend” Donald and I go to see Deadpool. In the middle of the film, Donald decides to stand up and start talking about how he is going to #MakeAmericaGreatAgain through his obscure, vague, and not-really-a-plan-at-all plan. The manager of the theater comes in and Donald is escorted out of the theater.

Is Donald going to be arrested for what he did? Probably not. He was protected under free speech and did nothing that would violate the law. But yet, Donald was still removed from the building. Is this not censorship?!

Well… It’s not censorship. Free speech protects you from the government preventing you to share your thoughts, but it doesn’t stop the people around Donald from thinking that Donald is a dick.

Now, had Donald said he was going to build a wall, detain all non-whites, and then instructed me to help him do it right now, that would could potentially get Donald in legal trouble.

So when we look at the case with Wakefield, we can think of the Tribeca Festival as a private party. Wakefield initially was invited to their private party. When other people heard about Wakefield being in attendance, they got pretty pissed off that a disgraced “doctor,” who is unable to practice medicine in his home country, was given a platform to share his ideas. Providing a platform for Wakefield in itself legitimizes the notion that the hypothesis of a MMR/Autism link is worth debating- it isn’t. It’s been thoroughly debunked.

The complaints rolled in so quickly that the host of the party, De Niro, acquiesced and canceled the showing. This is not censorship. The choice to invite or not invite someone lies with the Film Festival itself. Wakefield was a guest at their private party and has now been barred from attending. Wakefield is not entitled to anything as far as the Festival is concerned.

Wakefield is free to show his movie anywhere he wants: the government had absolutely nothing to do with the cancellation and is not prohibiting him from doing so. He could rent out a building and show it in the (putatively empty) building. He could rent out a theater of his own and show the movie. He could even solicit theaters to just play it as-is.

A fun fact about Wakefield is that he, prior to his original (and now debunked/retracted) 1998 study, was designing his own vaccines. It was learned that Wakefield himself was planned to vilify vaccines currently in use and replace them with his own versions (in turn, making him money).

Wakefield was literally a shill for himself, attempting to lie in order to push his own version of vaccines. It’s astounding that anti-vaxers aren’t aware of this fact: the man who started the entire anti-vaccine religion did so purely in order to try to sell his own version of vaccines. And now that he can no longer practice actual medicine, he is again distorting the truth to his financial gain. Wakefield is the antithesis of what the anti-vaccine movement stands for.

Wakefield is a scumbag out to make a buck,
and anti-vaxers are blind to the fact that he is preying on them.

When looking at Wakefield’s past behaviors, we can see a pattern of doing what’s convenient to benefit himself. Wakefield created his own vaccines, then fraudulently attempted to discredit his would-be competitors, getting his medical license revoked. Now that he can’t practice medicine, he’s changed his game and is attempting to make money from a film.

By default, documentaries are likely going to be biased towards their cause. The issue becomes when they portray themselves as being unbiased or when their thesis is contradictory to actual science. They do not deserve equal time.

If Wakefield truly cared about getting his message out, he would post the film online immediately, for free. I doubt he will do this though, as he is looking for a payday for the film.

Anti-vaxers: Wakefield does not care about you or the anti-vaccine movement. Wakefield only cares about himself. He is not your “hero,” and should not be lauded as such.

He’s literally the embodiment of everything you loathe – a shill and an unlicensed, discredited doctor. He is not your friend, not your ally, and is not deserving of any of your respect.

Trump’s Finger is On the Nuclear Button. And There is No Failsafe.

Alex Jones and Pizzagate: Life is Hard When You Have to Apologize

No Your Internet Woo Will Not Cure My Medical Problem