PENTINENT PASS, IOWA — When two of the people responsible for the Center for Medical Progress’ Planned Parenthood “sting” videos were indicted by a grand jury in the conservative state of Texas on charges of tampering with a government record and soliciting the purchase of human organs on the black market, many were wondering what former Hewlett Packard CEO Carly Fiorina’s response would be.

Tweeting from her official, verified Twitter account, Ms. Fiorina sent two short tweets as a way of a simple statement after the news of the indictments broke. “Oops, J/K, LOL. #Plannedparenthood #mybad #getitrightnextimeCarly,” the first tweet said. Seemingly, Fiorina was acknowledging that she had made a mistake in being so adamant about what she saw in the sting videos, but without giving specifics, some on the Hill aren’t sure if she’s just trying to side-step responsibility and deflect scrutiny away from herself.

Ms. Fiorina, who at one time was surging in primary popularity polls, has made a name for herself this election season as a staunchly pro-life candidate. She made her biggest splash of the primaries when she told an emotional story about a scene she had seen in the videos put out by the CMP. Though the veracity of the videos themselves has always been suspect, and the scene itself that Fiorina described has never once been found by independent fact checking agency, she has often doubled, tripled, quadrupled, and quintupled down on her rhetoric, to the point that many feel her hostile tone toward Planned Parenthood helped inspire the deadly shooting at one of the low-income health providers’ facilities in Colorado Springs, Colorado at the end of last year.

Requests for interviews thus far have been declined, but in her second tweet on the indictments, Fiorina touched on the Planned Parenthood shooting directly. “I’d feel bad about inspiring a domestic terrorist attack with such obviously fraudulent evidence, but you know, #YOLO!” was how her tweet phrased her remorse and sorrow over having indirectly caused people to lose their lives. 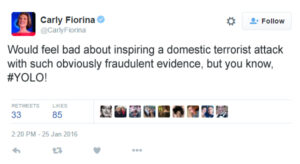 Later that night, current Republican front runner Donald J. Trump said he thinks “Carly’s a good broad” but that she, “like lots of dames before her, opens her pie-hole up too much.” Trump said if he wins though, he could “absolutely use someone like Carly” in his cabinet and would create a new post just for her. “Secretary of Mendacity and Half-Truth,” Trump told reporters as he stepped of his jet at a campaign stop in Iowa, “that’s what she’d be. Imagine how much easier Cheney and Bush could’ve sold the Iraq War with a liar like her on their side,” he said as he let out a long, slow whistle.

Ms. Fiorina has dropped so low in the polls that she was recently excluded from the last Republican debate’s prime time stage. She previously was the CEO at Hewlett Packard when it went through one of its worst fiscal calamities in its history. She is widely considered to have failed in that position.

This story was cross-posted from The Political Garbage Chute.

DEA Agent Explains Why the Drug War Is an Unmitigated Success

5 Reasons It Totally Makes Sense to Be a Constitutional Originalist