On Tuesday evening, Anne Rice wrote a Facebook post on her page, congratulating Hillary Clinton. Ms. Rice is recovering from a serious illness, and hasn’t been active on Facebook, leaving the day to day tasks to her assistant, Becket. Thus, it is likely she had no idea what was about to happen. Within minutes, supporters of Bernie Sanders descended, attacking Anne Rice for her post. It became so contentious, Anne finally removed her original statement, overwhelmed with what she called hate speech. Hate speech like this:

We all saw it. You can pull it down, but you are now on the wrong side of history. Did Hillary promise more vampire anal sex? Or was it just money? Or did you just drop the post to rework it into about 400,000 more words than it needs? Did you know that in creative writing courses today your work is the example of how not to write descriptive text? I’d say you’ve lost a fan, but since you became a right wing nut job and got intolerably Christy you’ve lost most of us anyhow. When Trump wins, your books will be on the pyre with everyone else’s. And we will all remember how you supported the only candidate who can’t beat him. I guess you finally got enough money to become one of them.

Anne Rice is most definitely not a “right wing nut job,” nor is she some sort of paid shill. Anne Rice is a kind and generous woman who took over an hour several years ago to speak to me on the phone for an interview. She does not warrant the hate and vitriol Sanders supporters were hurling at her all Tuesday and Wednesday. And she is not alone.

George Takei shared this meme with his millions of Facebook followers: 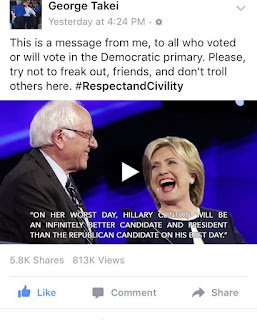 Takei’s point with this meme is obvious-we need to keep Republicans out of the White House. The quote, by the way, is from Bernie Sanders. That fact did not stop the “Bernie Or Bust” brigade from going after George Takei with a vengeance, posting things like:

George, you’re advocating for people to support a war monger. Hitlery Clinton is Dick Cheney in a pantsuit. She’s a vile human being, better suited to be on trial for war crimes, rather than seeking the presidential nomination.

Very disappointed, your [sic] just telling people to vote the line when you would be quick to throw insults to the other party for towing the line. God forbid people vote with their free will and vote for a candidate they like. And yes I love Bernie and will vote for him if he’s the nominee. If Hillary is the nominee I’m voting Republican.

you have lost your mind???.. why in the fuck would you back hillary, the fucking RIGHT WING CLOWN CRIMINAL???

I can no longer follow you knowing you support an Imperialist, Warmongering Psychopath like Clinton. She’s the type of politician that would be standing at the gates of the Internment Camp they threw your family in. Bye, George.

I just lost respect for you when you put your story for Hillary. We thought you were better than this. I guess even Queens like you can be bought.

George, stick to the droll puns and gay humor.. Politics is apparently too complicated for you. We’re willing to lay it all on the line for what we believe in. Things have got to change! And after THIS fiasco of a primary season, more than ever, it’s obvious things have to change. Don’t be a corporate puppet. ‪#‎NeverHilLiary‬

Takei made a video, explaining his position, which didn’t go over well, either.

The “Bernie Or Bust” movement is made up of many different demographics, but the most prominent is Millenials. In 2004, researchers Neil Howe and William Sturgess identified Millenials as “as those born in 1982 and approximately the 20 years thereafter.” (source)

Someone born in 1982 would be 34 this year, and would have been 28 in 2010, the year the Tea Party slithered into Congress, thanks to severe apathy on the part of the left. But when Bill Clinton stated this fact-we lost the House in 2010 because younger people didn’t vote-“liberal” media and bloggers lost their minds, because they all think of Millenials as high schoolers. Even someone born prior to November in 1992 would have been able to vote in 2010.

This November is going to be rather interesting, given how many Sanders supporters are stating they will either write in his name, not vote, or vote Republican. Is Hillary Clinton perfect? Of course not, and neither is Bernie Sanders, but it often seems that Sanders supporters view him as some sort of messianic Robin Hood, and he can do no wrong. And when a public figure dares to post something with which they do not agree, Bernie Sanders supporters attack.
When this election cycle began, I wonder if anyone saw this coming. That liberals would turn on each other, begin repeating right-wing lies, begin attacking friends, blocking family on social media, becoming misogynists, and behaving like conservatives. A lot of us were prepared for a fight between left and right. We were not prepared for this. At least I wasn’t. I wasn’t prepared to see a male friend (well, former, after this) post the following as part of an epithet-laden diatribe against Hillary Clinton:

The general consensus from my friends, one of whom is a Bernie Sanders supporter, was “ew.”

I’m sure Clinton supporters attack as well, and I’m sure some of them have said or written things they could take back. It just seems, at least on the internet, Sanders supporters attack with much more vehemence, more rage, more hostility, and sadly, more parroting of right-wing tripe.

Hopefully, we can pull it together in time to keep Donald Trump or Ted Cruz out of the White House, but I have my doubts. I’ve tried asking for pragmatism, for people to look at the bigger picture, and I was attacked. I’ve been removed and blocked on Facebook for pointing out Pope Francis did not invite Bernie Sanders to the Vatican. I’ve been called an elitist, a closet conservative, and other names that I prefer not to type. All because, while I am a Hillary supporter, I will vote for Bernie if he is the nominee, and I asked Sanders supporters to do the same-vote for Clinton if she is the nominee. You’d think I asked for Sanders supporters to beat themselves to death with Charlton Heston’s gun.

I’m tired of the infighting, I’m tired of being scared to say I support Hillary Clinton online. I’m just tired. Vote blue, please, because honestly, the alternative is truly frightening.

Try Not to be Shocked: A School Shooting Has Happened in...

Out Of The Loop? Here Is Your Tuesday Trump Update