If you follow me on Twitter, you’ve already noticed that I’ve been watching the Republican National Convention the past couple of nights. So far, it’s been about what I expected: Hillary bashing, trying to make Trump look like a decent human being, and avoiding any real discussion of Trump’s plan if he were to be elected president. Then, Ben Carson happened.

This blog was originally posted on aScienceEnthusiast.com. You can also follow Dan on Facebook at A Science Enthusiast!

If you haven’t paid attention to the 2016 elections, Ben Carson is a former brain surgeon, former 2016 presidential candidate, and a creationist. Carson has also said a lot of pretty off-the-wall things, such as comparing Obamacare to slavery and the Gestapo, so I was excited/scared as to what word salad we were about to be exposed to last night. Ben Carson truly is the gift that keeps on giving.

Despite the official theme of the night being “Make America Work Again,” there was extremely little to no discussion of Trump’s economic plan (possibly because there isn’t one?). Instead, most of the speakers made at least one mention of how they’re “not politically correct” and the crowd cheering them for it.

Carson was no exception:

I have to start out by saying one very important thing: I’m not politically correct. And I hate political correctness because it’s antithetical to the founding principles of this country and the secular progressives use it to make people sit down and shut up while they change everything. It’s time for us to stand up and shout out about what we believe in.

The idea of “not being politically correct” is not something to be proud of. The definition of the word is to avoid expressions or actions that marginalize or insult a particular group of people who have been discriminated. It’s a bit concerning to me when our political “leaders” are creating an atmosphere that encourages others to not be concerned by the feelings and needs of others around them. It’s almost as if conservatives want to be able to freely say things that are racist, sexist, or xenophobic.

One of the things that I have learned about Hillary Clinton is that one of her heroes, her mentors, was Saul Alinsky. Her senior thesis was about Saul Alinsky. This was someone that she greatly admired and that affected all of her philosophies subsequently. Now, interestingly enough, let me tell you something about Saul Alinsky. He wrote a book called Rules For Radicals. On the dedication page, it acknowledges Lucifer, the original radical who gained his own kingdom. Now think about that.

The actual reference in the book:

Lest we forget at least an over-the-shoulder acknowledgment to the very first radical: from all our legends, mythology, and history (and who is to know where mythology leaves off and history begins — or which is which), the first radical known to man who rebelled against the establishment and did it so effectively that he at least won his own kingdom — Lucifer.

The reference is facetious at best, and not an actual statement of belief. But, Carson’s statement itself is nonsensical. What he’s suggesting is that Hillary Clinton is not qualified to be president because she has a former mentor who believed Satan existed. Isn’t this something all Christians believe in the first place, though? It doesn’t make any sense (not that we expected any of Carson’s thoughts to make sense, though).
Carson goes on:

This is a nation where our Pledge of Allegiance says we are “one nation, under God”.

While we can debate how creepy a compulsory pledge is (and nationalism in general) in a later post, we can look into the history of the reference to “God” in the allegiance. 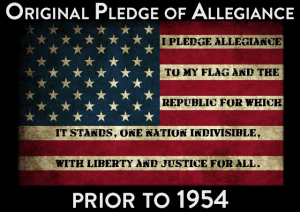 It was added to the pledge in 1954 to differentiate ourselves from the “godless Communists” in Russia. Because as we all know, you can’t be a decent person if you don’t believe in imaginary sky wizards.

This is a nation where every coin in our pocket and every bill in our wallet says “In God We Trust”.

True. But that is also something that wasn’t always the case. 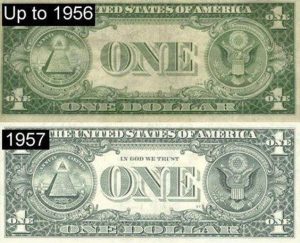 Ben Carson isn’t done yet, though:

The secular progressive agenda is antithetical to the principles of the founding of this nation. If we continue to allow them to take God out of our lives, God will remove himself from us, we will not be blessed and our nation will go down the tubes and we will be responsible for that. We don’t want that to happen. 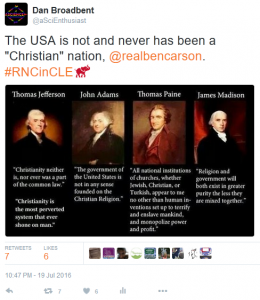 This is like a game of tag when you were a kid. You’d make up rules as you went along to make it easier for yourself. Mid-game you’d say “no tag backs!” or “trees are bases!” or “Jesse, I swear to god if you tag me one more f-king time I will punch you in the face!”

Republicans, you can’t cite a change, that you yourselves made, as evidence of the founding principles of our nation.

Atheists are not “taking” your God out of your lives. Actually, the only people trying to force their belief system on others is the religious right.
They have done this by using religion as a litmus test for an individual’s capability to be in public office, laws like RFRA, printing the word “God” on our money, discouraging evolution from being taught in schools, allowing “religious exemptions” for vaccinations, blocking women’s access to healthcare, attempting to block marriage equality, government sponsorship of a Creationism theme park, and teaching abstinence-only sex education. None of these positions have evidence supporting them.
The only reason to try to legislate these things is because of your personal, faith-based belief system. That kind of government is called a theocracy.
On the whole, we as atheists are the ones who fought for marriage equality, for LGBTQ rights, for comprehensive sex education, and for women to have access to healthcare. We are the good guys here. We are the ones being inclusive and tolerant.
Ben Carson’s final thought of the night was:

So, are we willing to elect someone as president who has, as their role model, somebody who acknowledges Lucifer?

I don’t know, but I’m willing to elect almost anyone except Trump.

This blog was originally posted on aScienceEnthusiast.com. You can also follow Dan on Facebook at A Science Enthusiast!