If there’s one thing that social media has proven, it’s that it’s not that hard to create a really dumb meme.
Take for instance the meme below. It’s based on talking point generalizations that have been around forever and a day when it comes to Democrats, and more specifically to liberals. The meme’s authors of course are making the classic mistake of “party vs. ideology” but it doesn’t really matter because they misrepresent liberals regardless in this horrible meme. So I thought I’d address it directly, because you can’t ignore stupid and hope it’ll go away.
For proof of that concept see Sarah Palin, Michele Bachmann and The Laffer Curve. 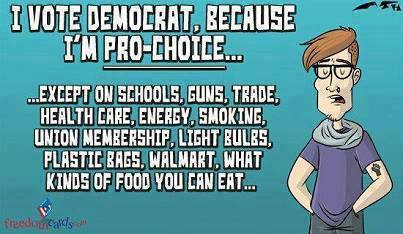 #1. Schools
Democrats and liberals don’t hate vouchers as a concept, they fight against tipping the scales toward religious-based and/or private schools that teach creationism. Of course, the people who share this bullshit meme hate public schools because in their minds, schools turn everyone into a liberal lemming — despite the fact that the vast majority of them went to public school and clearly came out as conservative lemmings. We just don’t think the government — the taxpayers ultimately — should pay for your son’s Catholic indoctrination.
#2. Guns
I guess this point is actually right. Liberals are anti-choice when it comes to guns…if you’re a rapist, terrorist, a severely mentally-ill person with violent tendencies, or you beat the shit out of your wife every night. But it’s nice to know that there are people out there who are so pro-freedom they think even a rapist should be able to own a gun because “America.”
#3. Trade
Yes, fuck those pesky liberals for wanting to make sure that large, multinational corporations don’t get rewarded for reaping the economic benefits of doing business in our country and then hiding their profits in other governments’ coffers. That makes them anti-trade — that they want the rules applied fairly to everyone.
#4. Health Care
The nuts and bolts of the ACA are Republican. They were born out of The Heritage Foundation, the most conservative of conservative think tanks. No one on the left wanted to actually force anyone to buy health insurance. We wanted to give Americans the most choice possible, and that’s chipping in together to help defray the costs in what’s known as a public option, or universal health care. But that was forced out by the Republicans, when the Dems actually thought they’d be able to get some kind of bipartisanship going. Silly Democrats, thinking adults would act like adults.


#5. Energy
Are there gangs of liberals roaming the streets with pipes and bats forcing people to put solar panels on their car? Of course not. All Democratic liberals are saying when it comes to energy production is that relying on finite energy sources that we know for a scientifically proven fact cause major damage to our planet’s ecosystem is stupid when every day we are warmed by the biggest, most awesome battery in our solar system. We are pro-choice in energy because we want more people to have more choices in how they personally produce the energy they need.
#6. Smoking
Weird. It seems to me I keep seeing liberals in the streets trying to get signatures on the ballot to let people smoke whatever they want to in their state. I seem to be seeing social conservatives out there fear mongering about the dangers of marijuana. Yes, I know the meme was talking about those darned liberals forcing smokers to either quit smoking or to stay in areas designated for the carcinogenic materials they are taking into their bodies. I say this is a former smoker — no one should feel bad for smokers. No one — but no one — has said you can’t smoke cigarettes. They’ve just said that since we have proven beyond a shadow of a doubt that it hurts more than just the person smoking, considerations for other people’s health should be made.
#7. Union Membership
Super dumb one. All liberals and Democrats have ever said about union membership is that no one should be able to benefit from the risks associated with collective bargaining without actually taking that risk. In other words, why should someone who chooses not to contribute financially to the union get all the perks of the people who do?
#8. Light Bulbs
Someone needs to turn Rush Limbaugh the fuck off.
#8. Plastic Bags
Oh, I get it. Laws that keep you from getting plastic bags are anti-choice, if you want a plastic bag. Again, no, they’re not anti-choice. They’re making you think about the consequences of your choice. It’s no different than a tax on cigarettes or booze. If you choose to do something we know has harmful side effects, you choose to do so knowing you will pay a fine. People made a choice to vote for these ordinances, or they made a choice to vote for people who wrote the laws, and all they have to do to reverse them is vote for repeal referendums or different candidates. Seems pretty choice-tastic to me.
#9. Wal-Mart
Apparently not wanting to subsidize Wal-Mart’s low wage business model is the same as being anti-choice now. But you would think that a group concerned with not being forced to pay for others’ choices wouldn’t want their tax dollars helping Wal-Mart’s board make millions in profits by paying their employees so little they have no choice but to use the safety net to put food on the table or live in rent-controlled apartments.
#10. What Kinds of Food You Can Eat
For the life of me I couldn’t think of a single, solitary Democrat who has proposed a law that would forbid the consumption of any food item. What they have proposed is taxing certain items we know to be more unhealthy as others at a higher rate. Why? Because eventually we’ll all have to foot the bill. Maybe you don’t want to admit that, but now you’re the one being anti-choice by not choosing to get the fuck over it.

Donald Trump Clarifies That Sarah Huckabee Sanders Is a Liar and...

ISIS Is Thrilled With The Election Of Donald Trump