Dinesh D'Souza has a sad over Trump not prosecuting Hillary Clinton.
ShareTweet

SAD SACK, NEW JERSEY — When President-Elect Donald J. Trump announced that he would not be directing a special prosecutor to investigate Hillary Rodham Clinton’s use of a private email server, despite campaign promises to the contrary, many of his most loyal supporters were incensed and even outraged. One very famous supporter, however, had a different emotional reaction.

“For once I can’t lie,” Dinesh D’Souza wrote on his blog this week, “the fact that President-Elect Trump has decided to forego the prosecution of Hillary Clinton has left me depressed and quite despondent.”

The blog entry came after D’Souza, who first made a big name for himself for directing a documentary alleging to have evidence that President Barack Obama was born in Kenya and not the legitimate President of the United states, tweeted his anger and frustration over Trump’s decision. 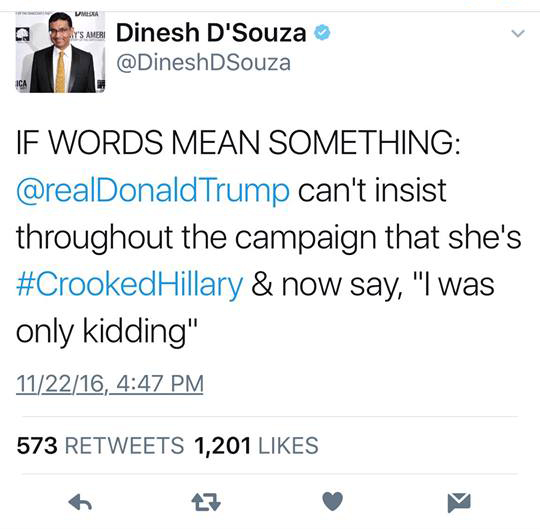 D’Souza lashed out at Trump calling him a “false füher” and accusing him of “being fascist just for the votes.” Mr. D’Souza, who was plead guilty to campaign finance violations and served a house arrest sentence in 2014, said that on a personal level he’s “bitter and angry that orange poser” didn’t use his film, “Hillary’s America” as direct and irrefutable proof of her criminality. He said that Trump had “ample evidence in [his] film” to send Ms. Clinton to prison “for at least a bajillion lifetimes.”

“What good is crafting rock-solid propaganda if no one is going to believe it,” D’Souza asked his blog readers, asking again, “Doesn’t anyone believe my bullshit propaganda anymore?”

His 10,000 word blog entry details what D’Souza has done since finding out that Trump wasn’t going to prosecute Hillary after all, in order to cheer himself up.

“I’ve made up lies and spread them about John Kerry,” Mr. D’Souza wrote, “the Obamas, the Clintons and Obamas being the same alien-lizard hybrid people who just switch skin and employ secret communist technology to make themselves appear in the same room together, and that Hillary secretly had the entire human race wiped out and then put back on the planet again using spirit cooking. And none of these bullshit stories can lighten my mood. Our dear president has truly let me down, before he’s even sworn-in.”

In one particularly bleak passage, D’Souza says he’s even considered suicide since finding out that he “won’t get to see [his] dreams of locking up a woman for crimes we can’t prove” come to fruition.


“I’ve even thought about suicide,” D’Souza wrote, “because I really can’t see the point of living if my lies aren’t taken at face value as truth. But just as I was about to stick the hose I’d run from the front driver’s window into the exhaust pipe, God came and literally spoke to me. He told me that no one would want me no matter where I ended up, which he assured me was not his house. So now, I’m stuck in a country that won’t make me its Secretary of Propaganda and I can’t even kill myself. Woe is me.”

We were unable to find anyone who cared enough about D’Souza’s well-being to comment on this story.